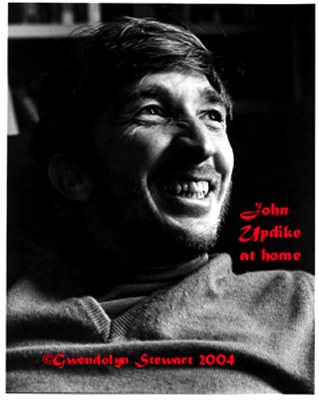 "They're all really great, very alive.   It's hard to choose.

But I took two, one head, the 'straighter' head [the photograph in question is here],

though the other [above] is well-night [sic] irresistible...."

-- John Updike in a letter to Gwendolyn Stewart, May 25, 1972, regarding photographs
from a session at his home at 50 Labor-in-Vain Road, Ipswich, Massachusetts -- 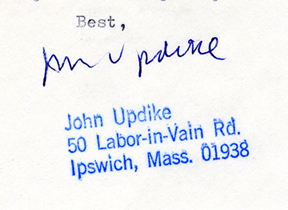 "Each of the Rabbit novels was written in a different setting -
Redux belonged to my second house in Ipswich, on the winding, winsomely named Labor-in-Vain Road,
and to my rented office downtown, above a restaurant whose noontime aromas of lunch
rose through the floor each day to urge my writing to its daily conclusion.

Another Photograph of JOHN UPDIKE AT HOME, 1972

A Color Photograph of JOHN UPDIKE, 1972, Complete with the Famous Red Beard, and Some Reflections on Updike's Intimations of Mortality

Photograph of JOHN UPDIKE on the Front Page of the New York Times, June 21, 2010 -- Updike's Favorite from this Session 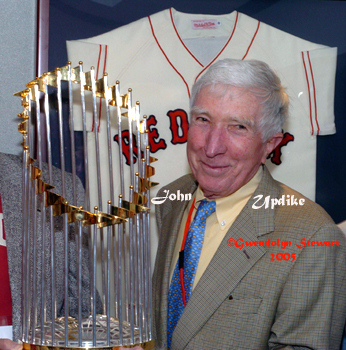 "Fenway Park, in Boston, is a lyric little bandbox of a ballpark.   Everything is painted green
and seems in curiously sharp focus, like the inside of an old-fashioned peeping-type Easter egg."

"The affair between Boston and Ted Williams was no mere summer romance....
Though we thumped, wept, and chanted 'We want Ted' for minutes after he
hid in the dugout, he did not come back.   ...   Gods do not answer letters."

An interesting profile (in spite of the lame title), based partially on observation and interviewing, which traces back through Updike's history (including "the worst thing that he had done in his life") and announces his newest novel, VILLAGES (Knopf, October 2004), described by the Washington Post as "A coming-of-age story in which women -- many, many of them -- are a young man's defining teachers."

GWENDOLYN STEWART is both a photojournalist and a political scientist specializing in political leadership in Russia, China, and the U.S.   A former Bunting/Radcliffe Fellow, she is an Associate (and former Post-Doctoral Fellow) of the Davis Center for Russian Studies and Central Eurasian Studies at Harvard, as well as an Associate in Research of the Harvard Fairbank Center for Chinese Studies.   For the Fairbank Center she co-founded and co-chairs the China Current Events Workshop, a forum for examining pressing issues in Greater China.   Her Harvard Ph.D. dissertation (Sic Transit) dealt with the role of the leaders of the republics, especially Boris Yeltsin, in the breakup of the Soviet Union.   She is currently writing RUSSIA REDUX , the story of Russia under Yeltsin and Putin: part political analysis, part travel-memoir.   Imagine wandering over the largest country on earth, not in the train of a railroad, but in the train of one of the most powerful and contradictory men on earth.   Or all by yourself.

THE PICTURE OF THE DAY

An exhibition of a quarter-century of the photography of Gwendolyn Stewart entitled "HERE BE GIANTS" was held at Harvard.
Coming:   HERE BE GIANTS The Book.