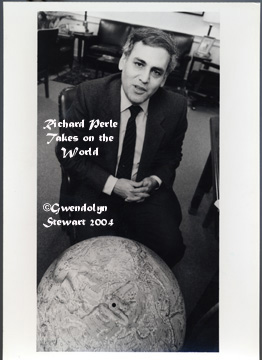 RICHARD N. PERLE: The eminence grise of the neoconservatives.   Late of the Pentagon's Defense Policy Board.   Ronald Reagan's Assistant Secretary of Defense for International Security Policy.   Aide to Senator Henry ("Scoop") Jackson (D-WA) before that.   Author of Hard Line, a novel.   A partisan of Ahmad Chalabi, and a vociferous advocate of war with Iraq.   Combative, and unapologetically so.

An exhibition of a quarter-century of the photography of Gwendolyn Stewart entitled "HERE BE GIANTS" was held at Harvard.

Coming:   HERE BE GIANTS The Book


GWENDOLYN STEWART is both a photojournalist and a political scientist specializing in political leadership in Russia, China, and the U.S.   A former Bunting/Radcliffe Fellow, she is an Associate (and former Post-Doctoral Fellow) of the Davis Center for Russian and Central Eurasian Studies at Harvard, as well as an Associate in Research of the Harvard Fairbank Center for Chinese Studies.   For the Fairbank Center she co-founded and co-chairs the China Current Events Workshop, a monthly forum for examining pressing issues in Greater China.   Her Harvard Ph.D. dissertation (Sic Transit) dealt with the role of the leaders of the republics, especially Boris Yeltsin, in the breakup of the Soviet Union.   She is currently writing RUSSIA REDUX, the story of Russia under Yeltsin and Putin, part political analysis, part travel-memoir.   Imagine wandering over the largest country on earth, not in the train of a railroad, but in the train of one of the most powerful and contradictory men on earth.   Or all by yourself.